To nurture and inspire your ocean spirit

After having gone through the accident in Shattered Dreams I was faced with a new challenge… overcoming fear.

The doctor explained that I would have to be kept in the intensive care unit to monitor my progress as the swelling goes down in my neck. So far I could pretty much move everything but couldn’t feel my left thumb and didn’t have control of my bladder.

The place was quite special; there were no windows and the white lights were on all the time so it was impossible to know whether it was day or night!

One night, the muttering and shuffling around in the next compartment woke me up; it sounded very purposeful. The nurses arrived; there must have been at least three of them:

‘If you don’t stop we will have to tie you down’ I heard one of the nurses say in the gentlest way you could ever say such a thing.

To which she cried:

The sadness in her voice fractured my heart. Tears came to my eyes as I could feel the pain she was in, the pain of the heart and soul.

The hustle and bustle died down but I couldn’t sleep; the sadness in her voice was still reverberating in my head. The next morning I asked the nurse what happened.

‘She tried to pull herself out of the bed but could not move her legs; it could have badly hurt. She slipped in her bathroom and hurt her spine which left her paralyzed from the waist down.’ he said.

Later that day I told the doctor that I was either he would move me to another room or I would leave; he had no choice but to bend to my request this time.

Being moved out of ICU was like suddenly landing in paradise. The sun was shining outside and I felt like I could reach the ocean from my room.

For the next few weeks, I was confronted with the choice of what to do with my life. Being here, still alive and also miraculously in full control of my nervous system made me wonder whether it was worth going through unnecessary risk in our life. Can’t we just sit back, go to work, come home, eat, and watch a movie rinse/repeat for the rest of our lives?

‘Of course we can’, I thought to myself, but the bigger question was ‘is it really living?’

One morning, a new nurse came in and to my own surprise was shocked to see me; she said:

‘Oh my god, I’m so sorry. It breaks my heart to see such a young man like yourself in this horrible situation!’

To which I replied with a big smile:

She wanted to know how it had happened, so I went through the whole story to which she interjected:

‘God has saved your life! You should never go surfing again!’

That’s when it became clear to me. Having been stuck here for weeks now, listening to stories of how some people are in a wheelchair from breaking their neck after being hit by a car or even from a coconut falling off a tree, I realized that I had an accident while doing something that I enjoy to the fullest, something that has come to define me over time. Whether it was God or luck that has saved my life, I was given another chance. Not a chance to sit at home or in a box wrapped in cotton wool being scared of falling again; I was given a chance to get back on my feet and become stronger and better than I ever was before. I was given a second go at truly living.

As my last day at the clinic arrived the doctor came in to give me my review before I would go free into the wild. I remember distinctively the way he looked me in the eyes and said:

‘The bone is healing well but it will take a long time to get better and it will never fully recover from the fracture. The C5 is permanently displaced by 5% which should not have a major effect on your life for now but may create arthritis issues down the line.’

He paused for me to soak in the information and then said:

‘No more surfing! Next time you will die!’.

The next few weeks were spent wondering whether it was really worth it. Is it worth dying or being confined to a wheelchair for the sake of gliding down some waves? This is when you realize what it means to be a surfer; it didn’t mean much before, just something fun to do… to get an adrenaline kick. But now you realize that being a surfer means so much more. It means that you have taken into account the dangers and that you still believe that it is worth it. Being a surfer is being one with the ocean; for better or worse.

I will not live my life being afraid of dying. 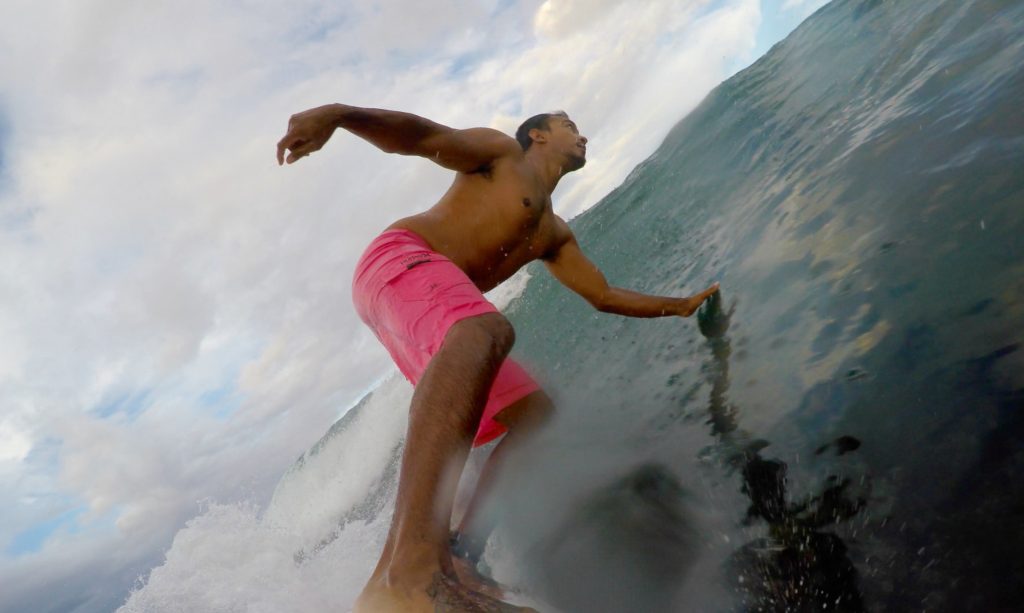 Getting back in the water

Being stuck on a bed dreaming of dropping down big faces of water is something; walking down the beach a few months after having broken your neck at that same spot is something else.

Walking down the beach, a dozen questions went through my head ‘Are you just stupid?’ ‘What the hell are you doing?’ and even ‘This is suicide’. On top of that, I picked the worst day ever! There was a strong offshore wind with small waves breaking straight onto the reef, nothing comforting to get back into it!

As I paddled, I first stopped at the bottom of the lineup where there is more water and less coral. I sat there for a bit, watching the waves peel. They were breaking really fast with one huge section so it would be all or nothing; I took my courage and paddled to the first lineup, where I had my accident. I saw the perfect wave was quickly approaching and the other surfers signaled me to take it. As I gave my first power stroke to catch the wave, I realized I didn’t have the strength anymore. I stalled for a second with that bitter taste of a broken neck in my mouth; this could go wrong.

I thought of my friend Jeff and simple yet wise words. I once asked him how he manages to take on such big waves despite being 69 years old and having a knee and a shoulder out of action… he said: ‘either I make it or I don’t’.

I hung onto those words and paddled for it. It became simple. Either I make it or I don’t.