To nurture and inspire your ocean spirit

It was one of those days when you don’t actually feel like going out. The weather was moody and grey, and the energy was nowhere to be found. The only thing that is pushing you out is the fact that life is always better on the ocean and the possibility of catching a big fish.

The plan was to head south out of the bay as there were decent south winds to bring me back home after what I planned would be a good 2 to 3 hours session. All geared up, I made my way out of the bay when I spotted what seemed to be a flock of birds straight out west into the deep sea. I turned around glancing at the setup on my 2 rods, I was trolling a small floating lure and had a 3/4oz soft plastic rig ready to be cast, so I was all set for a potential bonito fest.

As I covered half of the distance towards the birds crashing onto the water surface, I noticed a long stretch of glossy water like a canal about something like 80 meters straight in front of me. The glossy canal was carrying quite a bit of floating seaweed scattered along the surface. I checked for the birds but they already moved to another spot, and they were moving again quite quickly; it would be a restless chase for correct positioning. The decision was clear …grab the fruit at hand.

I paddled along the water canal looking down at what could potentially be there. The idea was that the floating seaweed would attract small fish that would then bring the bigger ones. I positioned myself to drift along with the seaweed and to be able to cast across it covering the best area with my bait.

I grabbed my rod and made my first cast just past the floating debris. It hit the water with a light splash and as it started sinking the rod tip bent to a 45% degree and the reel screamed… I was on! My first thought was ‘Don’t panic, let it flow’ and so I did! The reel kept screeching as the fish made its initial run straight down towards the bottom. As the tension on the rod softened, I started giving the fight on my side. Compared to everything I fought before even lifting up the rod was a challenge, but the shot of adrenaline from the 10 seconds initial run was pumping fresh in my veins.

Every single time I reeled in, the fish would fight back with another run but I could feel that it was getting slightly weaker and shorter each time. I was winning this fight and felt more and more relaxed and confident. As the fish got closer to the kayak, I looked down with my beady eyes to spot which type it was. It must be a Giant Trevally. As I looked straight down under me, an immense shadow like a small submarine glided slowly across the length of the kayak. It was a shark; a really big one.

My kayak is 13ft long but being quite a few meters away from a shark that big made me feel like I was floating on a flimsy stick in the middle of the ocean! I didn’t look again in the fear of seeing it coming straight up at me. There is no way that I’m going to slowly fight this fish. It needs to end now, or it could be the end of me. I got the fish to the kayak only to realise how big it was. After a few failed trials at gaffing it, the hardy tip of the hook finally pierced through the skin of the fish. It was now lying on my lap. 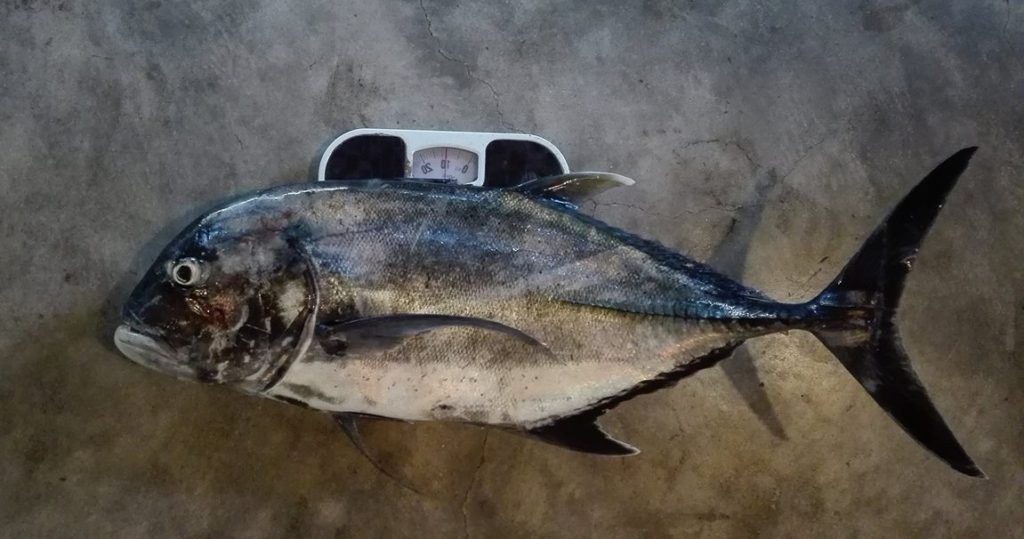 It seemed like he was looking at me straight in the eyes. He certainly was. He looked scared, wondering what I will do to him. My heart felt into disarray. What was an adrenaline filled fight for me was a fight to survive for him. It was the first time in my life that I felt like I was taking the life away from something; it was a horrible feeling. In order to shorten his struggle, I struck the fish hard on his head with my blunt stick; as the wood started to penetrate his skull, I heard a loud groan coming out of his mouth. A tear dropped down my cheek. That was it; he was dead.

As I paddled back home, I got the chance to recover from my emotions. I thought about how we eat what is on our plate without realizing that it’s a life that was taken away. We pick up food like it’s meaningless and next second throw it down the bin, without thinking about what the animal we are eating went through, how he may have had to fight to survive.

I now feel grateful every time I catch a fish. That Giant Trevally provided me with 10 meals for 2 and every single mouthful was more than just food; it was much more. I now make sure to release the small ones as they should have their chance to live and I only catch what I need. A life in the sea is worth more than one in your freezer.